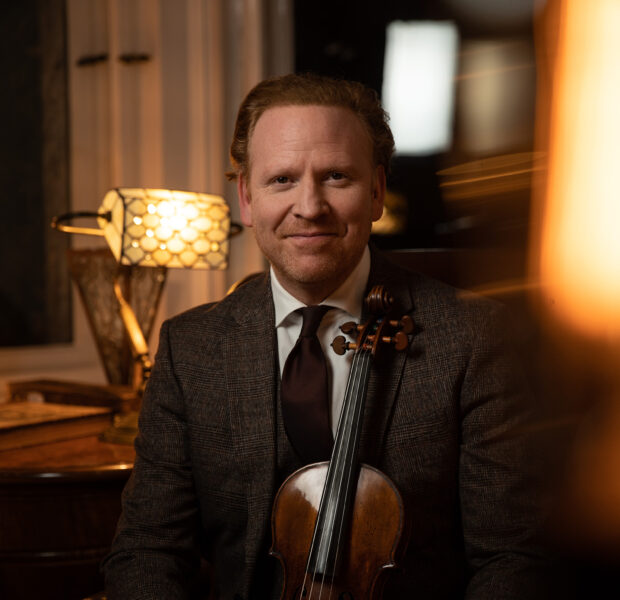 As Music Director of San Francisco’s New Century Chamber Orchestra, one of the world’s few conductorless ensembles, Hope embarks on three Bay Area tours this season. The first (Sep 30–Oct 3) showcases the U.S. premiere of Lament for violin and strings, a New Century co-commission from Mark-Anthony Turnage. The eminent English composer wrote the work for Hope, who gave its first performance for a Radio France broadcast with the Orchestre Philharmonique de Radio France in April, and of whom Turnage says: “He is a player with a lot of heart and that’s what I tried to capture in the piece as a whole.” Lament marks the composer’s second composition for him, following the double concerto Shadow Walker, in which Hope was, “not surprisingly, ideally fluent, … recreat[ing] Turnage’s enigmatic soundworld with aplomb” (BBC Music magazine). The fall tour also features Hope as soloist in a rare account of the Concertino for Violin and Strings by Polish composer Mieczysław Weinberg, besides seeing him lead Joseph Suk’s popular Serenade for Strings.

Hope and the orchestra reunite early in the New Year for a second Bay Area tour (Jan 20–23). Their all-American program pairs works by Copland, Florence Price and David Diamond with a suite of newly arranged songs by composers of the Harlem Renaissance, for which they will be joined by “vocally and dramatically impressive” soprano Leah Hawkins (Washington Post). For their third and final tour of the season (May 12–14), Hope and the NCCO perform an all-Mozart program featuring the violinist and violist Paul Neubauer as soloists in the composer’s Sinfonia Concertante for violin, viola and orchestra. “A master musician” with a “rich, sumptuous tone” (New York Times), Neubauer frequently collaborates with Hope, and may be heard on his live recording of Brahms, Schumann and Mahler Piano Quartets.

Following in the distinguished footsteps of Kurt Masur and Joseph Joachim, Hope became President of the Beethoven-Haus Bonn last year. He combines this role with that as Music Director of the Zurich Chamber Orchestra by leading the ensemble at Bonn’s Beethovenfest (Sep 4). Titled “Beethoven and Broadway,” his creatively curated program comprises Dimitri Mitropoulos’s orchestral arrangement of Beethoven’s superlative C-sharp-minor quartet with works by Bernstein, a protégé of the Greek conductor’s, and Gershwin, whose music Bernstein recorded and consistently championed. Both American composers are represented by suites arranged for violin and strings by versatile conductor, arranger and pianist Paul Bateman, with whom Hope has collaborated periodically since 2013.

To mark the release of his American-themed recording, Hope rejoins the Zurich Chamber Orchestra next winter for performances at Hamburg’s Elbphilharmonie (Feb 9) and Frankfurt’s Alte Oper (Feb 12). Again featuring Bateman’s arrangements, this time of Copland’s Old American Songs as well as of the Gershwin and Bernstein suites, their program also includes works by Duke Ellington, Sam Cooke, Florence Price and Kurt Weill.

The February 12 concert marks Hope’s second appearance of the season at Frankfurt’s Alte Oper, where he also revisits his “East Meets West” project this fall (Sep 25). Celebrating the power of international dialogue through music, the program presents cross-cultural works by De Falla, Bartók and Ravel; tributes to Ravi Shankar and to Hope’s friend and mentor, the late Yehudi Menuhin, by composer and sitar player Gaurav Mazumdar; and texts from Frankfurt native Goethe, by whose poetry collection West-Eastern Divan the whole project was inspired. These will be read by actor Katja Riemann, a guest on [email protected] during the early months of the pandemic. The program also features performances by Shahbaz Hussain Khan on tambura, with Sebastian Knauer on piano and luthéal and Mazumdar himself on sitar. Both Knauer and Mazumdar also played on Hope’s similarly themed 2004 album East Meets West, “an artistic milestone” (Music-Web International) that scored the violinist one of his four Grammy nominations.

Hope’s other fall highlights include a full “Daniel Hope Week” of chamber concerts at Germany’s Schloss Elmau (Oct 17–24) and a performance of Berg’s Violin Concerto with Vladimir Jurowsky leading the Berlin Radio Symphony Orchestra (Nov 21). It was Hope who premiered and made the first recording of the critically revised version of the concerto, which was named the “top choice of all available recordings” by Gramophone magazine.

The violinist’s other upcoming concerto engagements include accounts of Elgar’s Violin Concerto with Cristian Măcelaru and the WDR Sinfonieorchester in Cologne, where the radio orchestra makes its home, and the nearby North Rhine-Westphalia city of Essen (Feb 18–20).