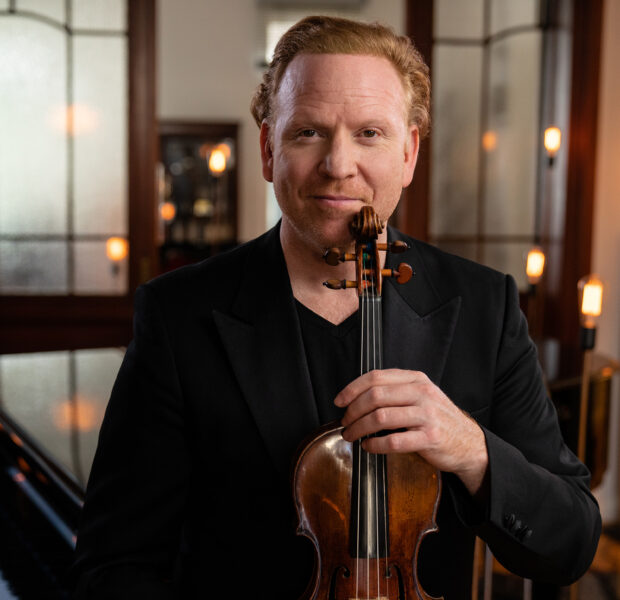 (September 2022)—On September 30, violinist Daniel Hope, lauded by San Francisco Classical Voice as a “master violinist and ‘musical activist’ in perpetual motion,” follows up his Music for Ukraine EP, released this past spring, with a full-length album on Deutsche Grammophon of the music of Ukrainian composer Valentin Silvestrov. Recorded with Ukrainian pianist Alexey Botvinov, the new album was made in collaboration with the 84-year-old composer himself, and includes the world premiere of his Pastorales 2020. Also this season, Hope leads San Francisco’s New Century Chamber Orchestra, of which he has been Music Director since 2018, in four sets of performances, plus a European tour, celebrating the ensemble’s 30th anniversary. Their season opener is Berlin 1938: Broadcasts from a Vanishing Society, a musical radio drama featuring vocalists Thomas Hampson and Horst Maria Merz playing both radio broadcasters and singers. The violinist also looks forward to presenting a series of “Winter’s Tale” Christmas concerts at Hamburg’s Elbphilharmonie, leading the Zurich Chamber Orchestra (ZCO), of which he is also Music Director, in three sets of European concerts during the season and a North American tour in the spring; and filming his second documentary with the French/German ARTE network in November. Hope has also just been named the Featured Artist for 2023 of the Schleswig-Holstein Festival, where he will program 50 concerts throughout the calendar year to celebrate his 50th birthday.