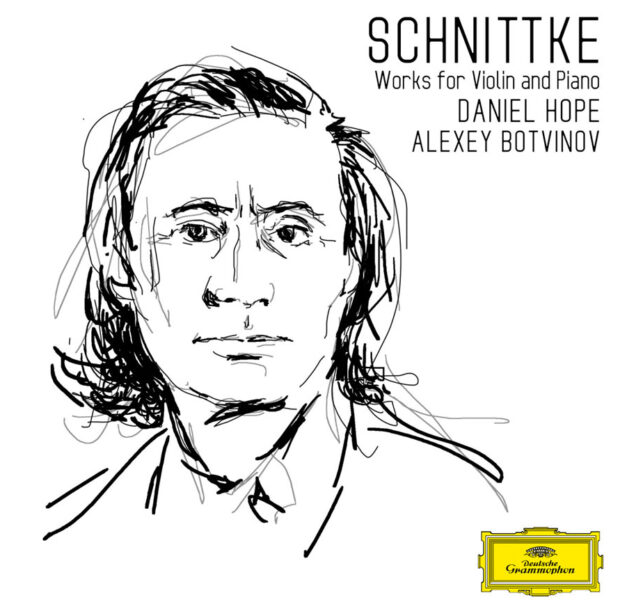 Daniel Hope’s new album, Schnittke – Works for Violin and Piano, is due for international release by Deutsche Grammophon on February 5. An exclusive DG artist with a wide-ranging and award-winning discography, the British violinist first fell in love with Schnittke’s music as a teenager, before getting to know the German-Soviet composer personally through a series of meetings and conversations in the early 1990s. Recorded with Ukrainian pianist Alexey Botvinov, a celebrated Schnittke interpreter, Hope’s program ranges from the composer’s immediately accessible Polka and Tango to his complex First Violin Sonata, the work that first ignited the violinist’s passion for his music. Click here to hear Hope’s account of the Tango.

Alfred Schnittke (1934-98) was one of Russia’s greatest post-war composers. His elegant explorations of past styles and free-thinking experiments in “polystylism” were both original and iconoclastic, at times bringing him into conflict with the Soviet authorities. In 1992, soon after meeting the composer for the first time, Hope was invited to appear on a television show in Munich. Among his fellow guests was a former senior KGB officer with whom he then shared a car ride to the airport. Hope recalls:

“I realized I had a unique, 40-minute opportunity to ask him things without his being able to leave. Much to his visible discomfort, I bombarded him with questions about Rostropovich, Solzhenitsyn, Shostakovich and Schnittke. He did his best to brush off any criticism as the mere histrionics of an 18-year-old upstart (which indeed I was), but when we got to Schnittke, he poured disdain on him. I’ll never forget what he said, sanctimoniously: ‘Young man, the others were legends, celebrated Soviet artists. Schnittke was nothing but a punk.’”

This dismissive attitude reflected the received Soviet wisdom about the composer. Schnittke’s public reputation rested primarily on the 66 film scores he wrote for state film companies, rather than his works for the concert hall, many of which were routinely condemned in official publications. Unlike the Soviet critics, however, Hope was immediately drawn to the ambivalence and stylistic diversity of Schnittke’s First Violin Sonata (1963), now one of the most frequently performed modern works for violin and piano. Hope says:

“The First Sonata is a work of extremes, and I think that was part of what fascinated me. Each movement is like an encapsulation of a musical ideal: the first is Schnittke’s own take on, and dislike of, serial music; the second revisits his obsession with folk music; the third brandishes a blatant quotation of Shostakovich’s Piano Trio; and the finale presents his amalgamation of the Latin American ‘La cucaracha’ theme with all of the previously gathered material. It’s exhilarating both to perform and to listen to: the first time I heard it, back in 1989, I was listening to 20th-century music with somewhat unblemished ears. Perhaps that provoked me even more.”

On his new album, Hope plays the sonata alongside a variety of Schnittke’s less well-known works for the two instruments. Both Suite in the Old Style (1972), five transcriptions of Baroque pastiches, and Gratulationsrondo (1974), a short tribute to violinist Rostislav Dubinsky, could be mistaken for long-lost pieces from the 18th century. Hope explains:

“Although both hark back to the past and celebrate Schnittke’s love of pastiche, they are also a subjective reaction to the sounds of the early 1970s. His Suite in the Old Style reworks music from two of his film scores – Elem Klimov’s comedy Adventures of a Dentist and a spoof documentary about, of all things, sport. … Film music gave Schnittke a certain freedom to experiment with different idioms and to plant the seeds that would ultimately blossom into his concert works. He also admitted that by writing the Suite, he had fulfilled his wish ‘once to write completely naively.’ But as always with Schnittke, there is more to it than meets the eye. And of the Gratulationsrondo he confessed to presenting us with ‘corpses wearing make-up,’ a deeply unsettling notion.”

Illustrating Schnittke’s wide stylistic range, the album also features his haunting Madrigal in memoriam Oleg Kagan (1990) for solo violin, a later, more spiritual work, and two colorful miniatures: his Polka (1980), inspired by Gogol’s short story The Overcoat, and Tango, written for Agony, Klimov’s 1981 film about the last days of Rasputin. Rounding out the collection is Stille Nacht (1978), an unnervingly spiky arrangement of the Christmas favorite that hints at the gulf between the world of official propaganda and the grim realities of life under the Soviet regime. Hope comments:

“I feel that there must have been a naturally rebellious streak in Schnittke. He certainly displayed a wicked sense of humor. He once famously described his First Symphony, a work I also performed and am still fascinated by, as ‘beginning like a circus and ending in an apocalyptic, terrifying way.’ Here again we see the extremes in his character and, ultimately, in his music.”

The release follows on the heels of Hope’s hit television series, [email protected], “a hugely successful show … that has resurrected the art of the house concert” (The Guardian), and which was recently recognized with the 2020 Czech Crystal Prize. Conceiving it as “DIY TV” for our socially distanced times, Hope created [email protected] last March, during the first European lockdown. Combining high-quality audio with the intimacy and immediacy of live, world-class home music-making, the daily series allowed the violinist and his guests – Christoph Eschenbach, Sir Simon Rattle, Christian Thielemann, Robert Wilson and many others – to stay connected with their audiences from the safety of his Berlin living room. Together with its sequels, [email protected] on Tour! and [email protected] – Next Generation, the show ran to almost 120 episodes, was streamed more than ten million times, and raised tens of thousands of Euros for artists in need.

For more information about Schnittke – Works for Violin and Piano here.